A few days of precious holiday. I have decided that this break will be for me, how selfish is that? I have just felt lately that I need some time to myself, time to do nothing, perhaps finish a few ufo's, read, think, but mainly just see where it takes me.

This morning I have been puttering around, talking to the chickens, tidying the kitchen a little and drinking tea. Tea with chocolate traybake and a browse through one of my favourite books. 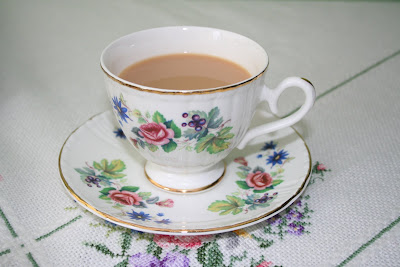 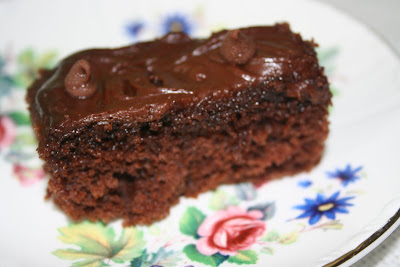 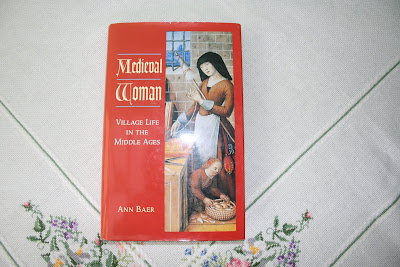 A few years ago I got a book out of the library. The only thing I could remember about the title was that it had the blurb 'Marion - the story of a medieval housewife' on the front cover. The story of Marion captivated me and stayed in my mind, so years later I decided to buy it. It took me 2 or 3 years to eventually find it, this time as 'Medieval Woman', by Ann Baer.

Poor Marion! To suffer the hardships and deprivations of a medieval life. Usually this time is written about from the romantic point of view of kings and knights and ladies. Marion knew nothing of those things, only the daily struggle for life on a subsistance level. The book follows a year in the life of the village, the daily routines interspersed with festivals that marked the seasons. The relationship which the serfs had with the hall. In Marions village the master was fairly benevolent, how people fared in under harsher stewardship I would hate to imagine.

Here is an excerpt from April

Peter had at last completed the plough he had been making to Rollo's orders, and today, as a sort of unofficial holiday, he was at home attending to the garden. Peterkin was with him, to Marion's pleasure, for she knew it sealed a relationship between father and son which she valued as part of Peterkin's training to be an adult. For the past weeks Peterkin had been out before dawn in all weathers, up in the new-sown fields, throwing stones and shouting at the rooks, and had returned home an exhausted wisp of a child, red-faced, red-fingered, re-eared and with a croaking voice. (Peterkin was around 8 years of age).

Today was peaceful and Marion felt content. With the top and bottom halves of the door open, the cottage was light inside. Marion had busied herself with sorting and tidying, stacking up her spools of spun wool, getting in logs, sweeping the ground round the fire clear of bits of straw, grinding some dried beans in the stone quern, always with half an eye on Alice who sat quietly on the floor sweeping up the dust into little ridges with her fat palms. The sun shone, but the wind, flickering over the new shiny grass had a chilly edge. Marion went out, pulling up her clothes, and squatted at the edge of the dunghill. She concentrated on excreting for a while, then her attention went to a bluebottle, newly awakened by the warm sun, which had landed on a dead leaf near her foot. She looked at its brilliant iridescent blue body, watched it stroking its front legs together. Then it flew to somehing vividly green nearby. It was the remains of a mallard drake's head, probably last year's, that had been thrown to Tibtab and which the cat had eventually abondoned. Old though it was, the brilliant green feathers still blazed with that strange unearthly colour in the sunlight. Marion watched the bright blue jewel walking on the bright green feathers, so strange, so unlike any colour in nature. If questioned, Marion would have said that both drakes' heads and bluebottles were part of nature, yet the very strangeness of these colours made her wonder if they were not supernatural, some lost angel's jewels or devil's snares. Just for the moment she wondered at the sudden flood of delight that these rare and glistening colours illuminated in her mind. It was not a thought that she would ever have tried to express. Then, realizing she had finished, she pulled some new-sprouted dock leaves growing by and wiped her bottom, for she had been brought up to be cleanly.

The goat had had her kid recently, a nice little nanny, at present sucking at her mother's teats. Marion filled up the goat shed water butt and pulled some more hay down to the goat's mouth level. She stroked the old nanny but did not touch her baby. Marion had already planned that she would allow the kid all her mohter's milk for a few weeks, then when grass was more plentiful, wean her, so that come summer the kid would be a perfect gift to the hall. A healthy nanny kid would be a valuable present and would free Marion from other obligations to the hall for some time. As the kid was weaned so Marion would steadily milk the goat and there should be plenty of milk and cheese for many months. The grass before the cottage already looked plentiful - perhaps she would get the goat out of doors next day if Peter would help tether her. It was all very satisfactory.

In these days of credit crunch and legitimate worry about the economy and the effect it is or could be having on us, reading this book again has reinforced in me how very fortunate me and my family are. To have good food, a change of clothes, warmth and the love of family, how wealthy I am!

Apples on an Autumn Day

So, this is how to spend a very enjoyable, very tiring, Sunday afternoon.


Take some good friends, with a few sacks of apples.... 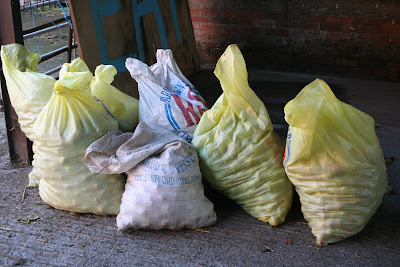 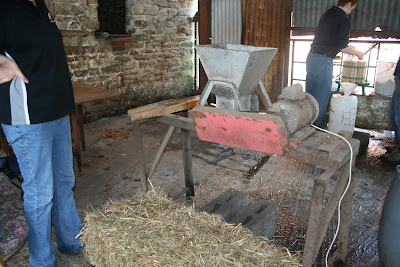 Place the apples in a barrel of water, a mix of varieties is always best.... 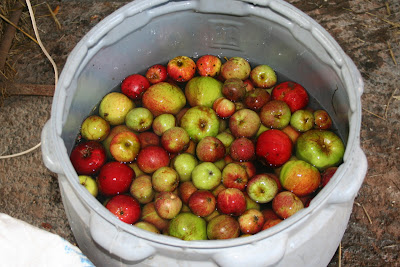 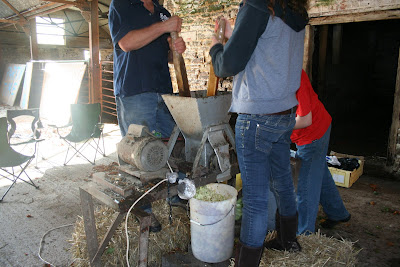 Buckets (and buckets and buckets!) of apple pulp result...... 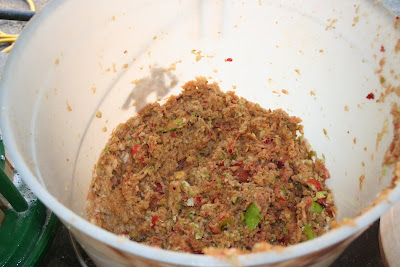 This then gets put through the Press, a little muscle power here helps..... 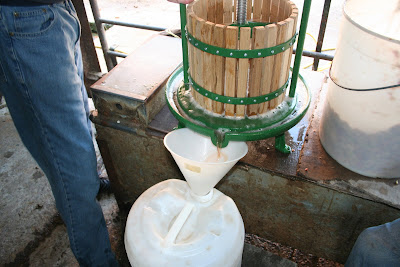 Phew! Now what is needed is more friends with more apples and another press 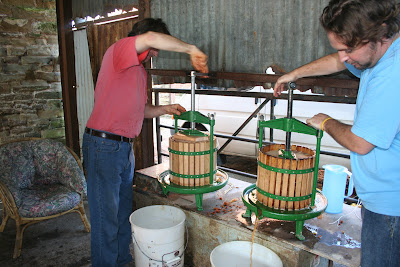 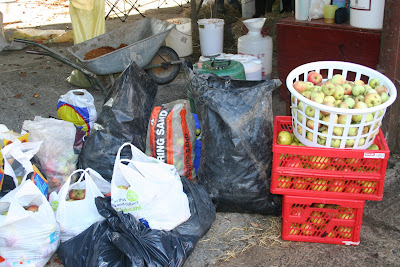 The resulting apple juice (lots of it!) now ready for cider making, wine making (my choice) and for freezing to be savoured through the winter months.


Of course lovely food, good company, a lovely autumn day and lots of glasses of refreshing apple juice make for a perfect combination. 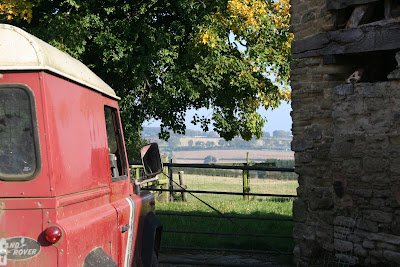 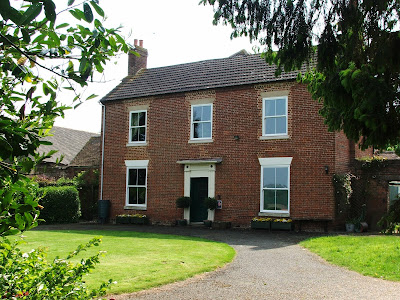 This is the home of my friend Cath. One day I will post about her - you have been warned Cath! She is one of those people who are so good at everything that you could really not like her!! Except that is not possible because she is truly lovely with it.

An awful lot of love, care and jolly hard work has gone into this home, it really was almost derelict when they bought it. This is the Georgian front half of the house, but in parts it dates to the 14th Century I believe, and it has been restored very sympathetically.

As well as being a farmers wife, Cath is a teacher so works outside of the home. Even so she has embarked on a B&B business, if anyone is thinking of visiting Shropshire here is a relaxing place to stay http://www.broomeparkfarm.co.uk/. Take a look!

And what about this for a view from the house 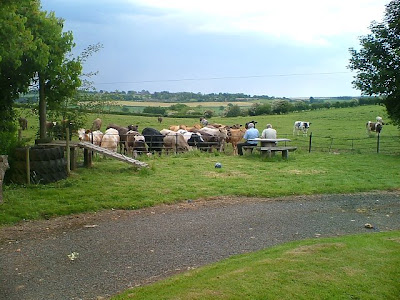 Autumn is progressing apace, with rain and winds on a regular basis. During a quiet spell we went to collect crab apples from this old tree, it was smothered in apples this year. I made Crab Apple Jelly and Crab Apple & Mint Jelly. I really did not like the latter, the jelly was very perfumed, the mint was too strong I think. One of the last blooms in the garden, I must look into getting more colour into the garden around the year, it's lovely in the summer but goes over very quickly. I am also in the process (very slowly mind) of digging up the entire lawn, next year will be serious vegetable gardening around here! 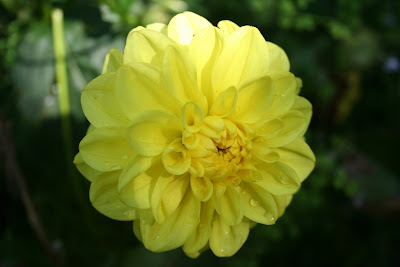 It is also that time of year when wrapping the shoeboxes is in full swing. http://www.operationchristmaschild.org.uk/
I try to do a couple in the evening, a very energetic lady collects them and there is a community push to fill as many as possible. I wonder if there will be as many this year whilst people are worrying about their own finances. 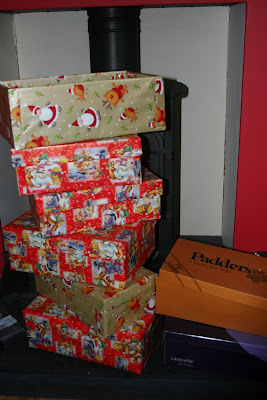 Last week I popped into Worcester to get some birthday presents - October is heavy with birthdays in this family! Well I managed to miss my bus, and with an hour to spare I made a bee line for a little quilting shop I know - The Cotton Reel. So anyway, can't get out of there without buying something - no not possible, so here are the stockings I decided to make for the nieces and nephew. I cut them all out last night ready to sew. I shall embroider their names on the top and embellish with ribbons and buttons. Can you see the gorgeous ribbon at the bottom - Love Never Melts. AAaahh! Christmas plans ahead, mincemeat, Christmas cake and more sewing = I really love this time of year. 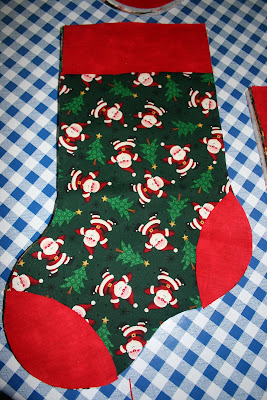 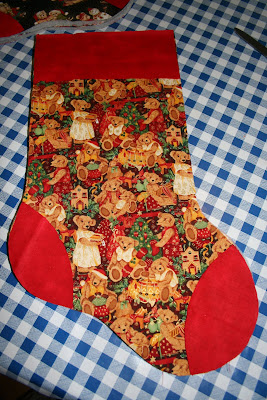 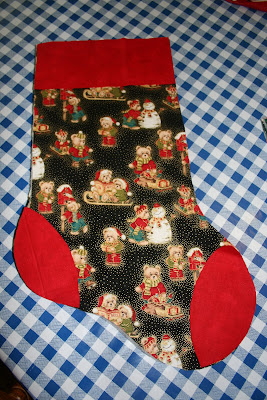 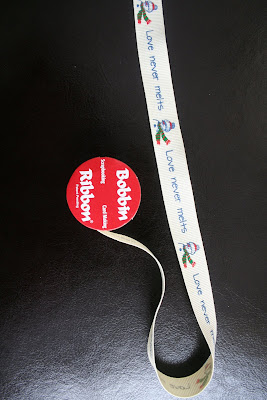 I have been enjoying this blog very much lately - http://blueberrycottage.blogspot.com/ I'm going to find a Pumpkin to try the Pumpkin Cookies, they sound delicious.
Posted by Shropshire Girl at 14:02 4 comments:

Shropshire Girl
A wife to a wonderfully patient husband, mother to two beautiful daughters. Striving to find time to create amidst the slog of everyday life. 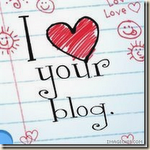